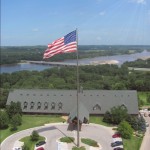 Standing high on the bluffs above the Platte River midway between Lincoln and Omaha, Mahoney State Park is the crown jewel of Nebraska parks system—and it would not be there but for the Foundation.

Through the Foundation, the initial purchase of 425 acres of land was made at a cost of $539,000 and additional land was purchased at a cost of $132,000. Ultimately, some 80 percent of the money required for the $14 million showcase was raised through private donations through the Nebraska Game and Parks Foundation.